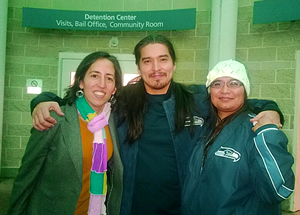 Seattle, WA – Innocence Project Northwest client Brandon Olebar walked out of jail into the embrace of his wife Mely and his attorney Fernanda Torres. Mr. Olebar served over ten years of a 16 ½ year prison sentence for crimes he did not commit. Mr. Olebar’s freedom was achieved as a result of a unique collaboration between the Innocence Project Northwest (IPNW) and the Office of the King County Prosecuting Attorney.

Mr. Olebar, 30, was thrilled to be free and to be reunited with his wife Mely Olebar. "It’s unreal," said Mr. Olebar. "The people that believed in me when I was in prison kept me going, especially my wife. She was my foundation and I’m blessed to have her in my life."

A jury found Mr. Olebar guilty of the February 2003 robbery and burglary of his sister’s boyfriend. The victim said that between 6 and 8 individuals broke into his home, pistol whipped and beat him unconscious over a period of 10-15 minutes. He recognized his former girlfriend, Nacaol Olebar, as one of the perpetrators and stated that the men involved had feather facial tattoos. When the attackers left, the victim was in a closet and was passing in and out of consciousness. Two days after the crime, the victim identified Mr. Olebar in a photomontage. Mr. Olebar, who does not have facial tattoos and who had an alibi for the evening of the attack, was convicted solely on the basis of the victim’s eyewitness identification.

Innocence Project Northwest began reviewing Mr. Olebar’s case in 2011. University of Washington School of Law students Nikki Carsley (‘13) and Kathleen Kline (‘13) uncovered a significant body of new evidence establishing Mr. Olebar’s innocence. They obtained sworn statements from three of the actual perpetrators of the crime who admitted their involvement and confirmed that Mr. Olebar was not present.

Rather than heading to court, IPNW Attorney Fernanda Torres approached King County Chief Criminal Deputy Mark Larson in May of 2013 with the new evidence. Torres and Larson worked together over the next several months on the case. After reviewing the evidence developed by IPNW and conducting independent interviews of the new witnesses, the King County Prosecuting Attorney moved on December 20, 2013, to vacate Mr. Olebar’s convictions and dismiss all charges.

"The Innocence Project Northwest brought this case to our attention, which caused us to re-open the case and re-evaluate our evidence," said King County Prosecuting Attorney Dan Satterberg. "A prosecutor has an on-going duty to receive and consider new evidence in a case, even after a jury’s verdict," he added, "and in this matter the new statements from the participants in the robbery cast enough doubts about Mr. Olebar’s involvement in the crime that we decided the case should be dismissed in the interests of justice."

"It is amazing to finally have Brandon out of custody and reunited with family," said his attorney Fernanda Torres. "I am thankful for the dedicated work of Nikki and Kathleen, who did an extraordinary job investigating, and for the collaboration with the prosecutor's office. Their willingness to correct an injustice in light of the new evidence shows true devotion to justice, even long after a case has been put to rest."

Mr. Olebar expressed deep appreciation to his wife for her ongoing support and to all of the individuals who worked on his case. "I was ecstatic to finally be heard when the Innocence Project Northwest took my case. My wife, the students and my lawyer fought for me and it means so much that they did that for me."

Innocence Project Northwest works to free the wrongly convicted in Washington State and effect policy reform to prevent wrongful convictions in our criminal justice system. Additional information can be found at www.ipnw.org.

We request all media inquiries be directed through counsel to honor Mr. Olebar’s privacy as he reunites with his family.