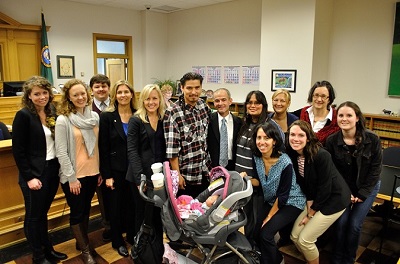 Brandon Redtailhawk Olebar is the first Innocence Project Northwest (IPNW) exoneree to be awarded wrongful conviction compensation under a law championed by Representative Tina Orwall and the IPNW Legislative Advocacy Clinic. RCW 4.100, signed into law on May 8, 2013, provides wrongly convicted persons who can prove actual innocence with $50,000 per year of wrongful incarceration and $25,000 per year spent wrongfully on parole, in community custody, or as a registered sex offender. It also includes payment of child support accrued during wrongful incarceration and provides the wrongly convicted with re-entry services and tuition waivers to state universities and colleges. UW Law students Caroline Bercier (‘13), Hunter Elenbaas (‘14), Thomas Hudson (‘13), Courtney Skiles (‘13) and Michael Windle (‘13), worked under the leadership of IPNW Policy Director Lara Zarowsky (‘07) to pass the law through the House and Senate with bipartisan and nearly unanimous support.

The agreed compensation order in In re the Wrongful Conviction of Brandon Olebar was entered on September 26, 2014 in front of King County Superior Court Judge Laura Gene Middaugh. Mr. Olebar, his wife Melissa RainPhoenix Olebar, and their infant daughter Creation Redmoonhawk Olebar, were joined by many of their supporters. Mr. Olebar was represented in these proceedings by Todd Maybrown, of Allen Hansen & Maybrown.

Mr. Olebar was released on December 20, 2013 after serving over ten years of a 16 ½ year prison sentence for crimes he did not commit. IPNW began reviewing Mr. Olebar’s case in 2011. UW Law students Nikki Carsley (‘13) and Kathleen Kline (‘13) uncovered a significant body of new evidence establishing Mr. Olebar’s innocence. They obtained sworn statements from the actual perpetrators of the February 2003 robbery and burglary, who admitted their involvement and confirmed Mr. Olebar was not present. Rather than heading to court, IPNW Attorney Fernanda Torres approached King County Chief Criminal Deputy Prosecutor Mark Larson in May of 2013 with the new evidence establishing that the victim eyewitness misidentified Mr. Olebar as his attacker. Torres and Larson worked together over the next several months on the case. After reviewing the evidence developed by IPNW and conducting independent interviews of the new witnesses, the Office of the King County Prosecuting Attorney moved to vacate Mr. Olebar’s convictions and dismiss all charges.

“Eyewitness misidentification is one of the leading causes of wrongful convictions,” said IPNW Policy Director Lara Zarowsky. “It played a role in nearly 75% of the convictions overturned through DNA testing.” Zarowsky is partnering with Washington State law enforcement, social scientists, and prosecutors to develop minimum standards for police investigators when conducting eyewitness identification procedures.

During the hearing, Mr. Olebar said he wanted to help the Innocence Project Northwest set other people free. He told the court he was hopeful that cases like his would not continue to be a problem in the future, but that he was “totally grateful” to be a part of history.

Innocence Project Northwest is dedicated to securing the release of those wrongly convicted in Washington State and effecting policy reform to identify and prevent wrongful convictions in our criminal justice system. For more information, go to: www.ipnw.org.