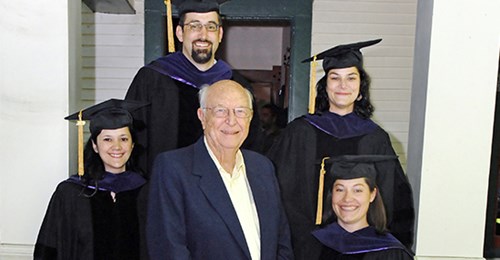 It began in homage to a man who believes the greatest gift we give the world is "showing up." Today, the scholars of the William H. Gates public service law program are doing exactly that in arenas across the country and around the world, living out their commitment to public service law.

The groundbreaking program began in 2005, funded by a $33 million endowment from the Bill & Melinda Gates Foundation in honor of its remarkable Co-Chair, William H. Gates Sr. '49, '50. The program awards five scholarships on an annual basis to first year students entering the UW School of Law J.D. program. Each Gates program scholarship award covers tuition, books and living expenses. Acceptance of a Gates program scholarship represents a commitment on the part of each Gates scholar to work in public service for five years following graduation. According to Amy Carter, Deputy Director at the Bill & Melinda Gates Foundation, Gates Sr. took a hands-on role in crafting the program after his family surprised him by announcing the gift. Not coincidentally, the Gates program is designed for an 80-year time span, mirroring its timing in honor of his 80th birthday. The foundation and the Gates family wanted to honor Gates Sr.’s deep commitment to public service by creating a scholarship at his alma mater.

"It’s had tremendous meaning for him," Carter said. "He wanted to do everything he could to make sure it was the most impactful program for the students and for UW Law. He wanted to make sure the support they receive is right-sized." Gates Sr., ever-magnanimous and inclusive, also wanted to ensure that students outside of the five scholarship recipients would benefit as well, by providing support for all students to attend lecture series and receive mentoring with the goal of raising the importance of public service law throughout the school and with all students. The result has been to raise the visibility and importance of public service law across the board.

Michele Storms, Assistant Dean for Public Service Law and Executive Director of the Gates program, is especially pleased to see the program enhance the law school’s overall commitment to public service law. "Our goal is to benefit the whole school. The impact of this program is like dropping a very large pebble into a very large body of water." said Storms. "As the graduates go into the world and do great work for justice, there's no telling how wide the ripples will spread."

"Our goal is to benefit the whole school. The impact of this program is like dropping a very large pebble into a very large body of water. As the graduates go into the world and do great work for justice, there’s no telling how wide the ripples will spread."  -Michele Storms, Assistant Dean for Public Service Law and Executive Director of the Gates Program

"We knew that the best possible gift for him would be one that supports and continues his long tradition of service by opening the door of opportunity to others. This program will have an impact not just on the lives of [the] scholars, but on all of the people they serve." - Bill Gates 2005

As the program marks its tenth anniversary, the ripple effect is well underway. Three of the four members of the first cohort of Gates scholars, those who entered the program in 2006, have completed their five-year commitment to public service law — the fourth will finish soon. Each is, as Gates advocated in his 2010 book, Showing Up for Life: Thoughts on the Gifts of a Lifetime, "showing up."

The four scholars from the original group are now fully engaged in public service law; the fifth member of the 2006 class had to withdraw. We spoke to each of the four who completed to find out where the Gates program and public service law have taken them.

Vanessa Hernandez, ’09, works diligently on behalf of American Civil Liberties Union of Washington state’s Second Chances program, where she is an advocate for the rights of individuals who want to reduce the barriers posed by criminal records, many of whom are juveniles.

Hernandez was a dedicated teacher when she and her young family moved to Seattle, shortly before the Gates program was announced. "I came to teaching because I wanted to work for social, racial and economic justice," she recalls. "I always thought that sometime down the line, if I was ready to transition to a different field, the tools of the law would be a way to effect that change."

"At the beginning of law school, I wouldn’t have anticipated that I’d be working on reentry," said Hernandez. "One of the amazing things about going to law school and doing internships is that you get a really good sense for how things often fit together. What I’m doing now is part of a broader continuum to achieve racial and economic justice. Education is the very front end. You could say that I now work on the back end, with people whom the system has failed. I love the work I’m doing now. I feel incredibly privileged to do this."

At his own five-year mark, fellow Gates scholar Mike S. Peters, '09, sees himself in an equally privileged opportunity to serve. He recently moved with his wife and young children to Bonn, Germany, where he is Chief of Staff for the International Paralympic Committee (IPC).

Peters came to UW Law after he too had established a career in teaching, working as assistant professor of communications at the University of Washington and doing research on how couples and families adapt to the onset of chronic illness or disability. At the same time, he was involved in the paralympic movement, having been a captain of the U.S. Paralympic National Soccer Team and having served with the U.S. Olympic Committee. When the Gates program invited applicants, Peters stepped forward.

Like Hernandez, Peters was interested only in public service law from the outset. The Gates program provided an opportunity to pursue what he had already resolved to do. Immediately following graduation, Peters worked in immigration law as an Equal Justice Works Fellow at Northwest Immigrant Rights Project in Seattle. "I fell in love with immigration law," he said, "especially the opportunity to help kids who have no special protections in immigration law proceedings." But when lack of funding ended his time there, Peters moved to the City of Seattle’s Office of Intergovernmental Relations where he drafted and worked to approve policies that support the city’s diplomatic efforts.

In each role Peters learned vital skills he uses on a global stage through his work with the IPC. Peters calls himself fortunate to be working for the international organization that provides opportunities for athletes with impairment to realize their goal of achieving competitive excellence on the biggest stage of all, the Paralympic Games. "In my new role," he said, "I’m very happily in the nexus of what the Gates program hopes to achieve."

Emily Alvarado, '09, has taken a very focused path since her law school graduation, setting her sights on the issue of affordable housing. "I chose a non-traditional career," she explained. "The Gates program gave me access to a network, the confidence and the financial ability to choose a path that was different." That path led directly to the City of Seattle's Office of Housing, where she is now Manager of Policy and Equitable Development. In her role with the City of Seattle, Alvarado lives out her passion, developing and implementing broad strategic policy that makes affordable housing for Seattle residents, as well as addressing specific housing issues on a daily basis.

"I wasn’t always interested in law," said Alvarado. "I was interested in policy, in urban politics, in how cities function and how they can foster equity or inequity. As I got closer to law school, I wanted the tools of the law to help bring more credibility and power to my voice in advocacy work." She believes the law gave her a different lens through which to view the challenges of inequity. Alvarado echoes her benefactor, Gates Sr., when she says, "The law is a tool." She is currently using that tool to address Seattle’s much publicized affordable housing crisis. "The issue certainly has public attention right now because so many people are feeling the effects of rising rents. But low income people are struggling merely to get by in Seattle. Given our city’s tremendous wealth, everyone should have their basic needs met, and that includes housing."

Colleen Melody, '09, was struck by the power of law in an incident in northern Idaho near her home. "A very famous group of white supremacists lived in Hayden Lake. They promoted and engaged in race-based violence that was harmful to our community." In September 2000, an Idaho jury rendered a $6.3 million verdict against the group, the outcome of a civil suit brought by the Southern Poverty Law Center that eventually led to the group's bankruptcy. "It was stunning to me to see that lawyers could effect that kind of change. Before that, I hadn’t thought that lawyers could do so much good."

Following a post-law school year of clerking for The Honorable Ronald M. Gould on the U.S. Court of Appeals for the Ninth Circuit, Melody joined the United States Department of Justice in Washington, DC as a trial lawyer in the Civil Rights Division, Housing & Civil Enforcement Section. In January of this year, Melody was named chief of the newly created Civil Rights Unit in the Office of EMILY ALVARADO COLLEEN MELODY 35 34 uw law FALL 2015 the Washington state Attorney General. Under her leadership, the new unit will investigate and litigate violations of the laws of Washington, including discrimination on the basis of race, gender, sexual orientation, religion, disability and veteran status.

By 2086, when, according to the terms of the endowment, the program as it exists now will end, nearly 400 aspiring attorneys will have discovered, as Melody puts it, "how to use lawyering" to change the world.

Although each is pursuing a different goal, the four original Gates scholars are unanimous on two points. When asked if they intended to change the focus of their careers now that their formal commitment to public service law has been fulfilled, all four gave the same answer: "I can’t imagine doing anything else." And when asked, “What do you see happening in the future with this program," they again agreed: "It will never end." They are confident the Gates program will create an ever-widening web of impact, a vast network of passionate people who believe, as they do, that people who care enough can indeed change the world, a network of people who will continue to show up.

From the Gates Foundation’s point of view, Carter said they expect year 81 to reveal "a huge cohort of citizens who are out in the world showing up for life and for others in the spirit of Bill Sr. and all that he is and has contributed — both as an attorney and as an engaged citizen." Results so far have already shown "an impressive, dedicated group of people who represent all the best of Bill’s values, and he is extremely proud of the students and what they have already accomplished."

The Gates scholars of 2006 are unanimous on one other point — their deeply felt gratitude. Peters articulated sentiment expressed by all four original scholars. "The gratitude," he said, "the thankfulness for the opportunities continues beyond the five years. I think we’re all very grateful, not only to the Gates family, but to the program staff and to those UW Law faculty members who put their hearts and souls into it. We’re all very happy to see the program grow and become so widely diverse."

"We’re delighted to honor Bill senior in this way. He has been an incredible example to Bill and myself, and we wanted to express our admiration and appreciation with a gift that connects him to future generations of committed, civic-minded students, and the ongoing work of the University of Washington."- Melinda French Gates, 2005