Women routinely outperform men in university classrooms across the United States and are invited more often than men to join student honors societies — yet women continue to be paid far less than similarly qualified male colleagues. 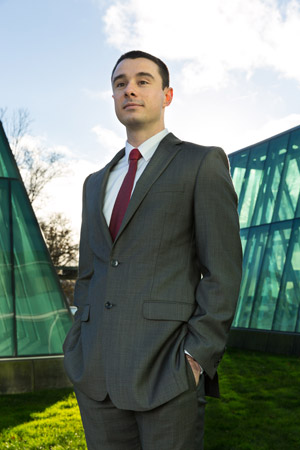 Adding to that inequity, women also fare poorly when suing to recover damages for workplace sex and gender discrimination in the courts, with only 6 percent of such cases going to trial and then only one-third of even those cases being successful.

These are among the points underscored by Harlan Mechling, a graduate student in the UW School of Law, in a research paper on gender inequity in the American workplace.

“The small population of elite students in this country is absolutely dominated by young women. Despite all of this, women may be being paid only 78 percent of what their male colleagues are making,” Mechling writes.

In his review of literature on the subject, he notes that although sex discrimination is prevalent in the workplace, “federal anti-discrimination laws in place today are not well suited to solve the wage gap issue. The existing federal laws need to be supplemented by state law in order to make recovery a viable option for victims of sex discrimination.”

Mechling points to California as an example of such reforms. Gov. Jerry Brown recently signed into law a bill that amends the state’s Equal Pay Act, introducing greater burdens on employers to justify wage disparities. That law also eliminates the “same establishment” requirement. This means, Mechling writes, “that a female department store manager, for instance, could sue her employer upon learning that she makes less than a similarly situated male manager at a different branch across town.”

Mechling sums up: “Washington state needs legislative reform in this area and it doesn’t look like Congress is going to act. States should follow California’s lead in creating a viable avenue for women to recover for sex discrimination.

This should be a wake-up call to our state and country leaders.”

For more information or a copy of this research paper, contact Mechling at mechling@uw.edu. Read a synopsis of the research here.