“My name is ShaCorrie Tunkara and I am a U.S. citizen. My husband Saja Tunkara, and I spoke out about medical neglect of himself and others detained at the Northwest Detention Center in Tacoma. Because of that, we got the worst retaliation possible: family separation and inhumane deportation.”

So begins the powerful testimony given by ShaCorrie Tunkara, a Pacific Northwest human rights leader who testified Dec. 5 before the Inter-American Commission on Human Rights in Washington, D.C. Her husband, Saja, was deported abruptly in October, just days after giving a Seattle Weekly interview; he remains in Sierra Leone gravelly ill.

The Inter-American Commission on Human Rights is an independent body of the Organization of American States.

Tunkara testified at the hearing along with five other immigrant rights defenders. Their appearance was supported by the UW School of Law’s International Human Rights Clinic, the Northwest Detention Center Resistance, the UW Center for Human Rights, New York University Immigration Clinic, University of Notre Dame and Migrant Justice.

Many UW Law International Human Rights Clinic students working with defender Maru Mora Villalpando on the project, Profit Over Dignity at the Northwest Detention Center in Tacoma, drafted the request for the hearing and coordinated the presence of defenders nationwide. Three of them traveled to DC: Catalina Saldivia Lagos, Dori Krupanics and Gabriella Ucha Ocampo.

The team presented the Clinic’s report, Surveil, Target & Deport: Defenders Under Attack, describing 17 cases of human rights defenders and bringing 6 testimonies of leaders who had been targeted, intimidated or deported because of their opinions and advocacy on behalf of undocumented migrants. The report highlights violations to the rights to equal protection and nondiscrimination, freedom of speech, due process in immigration proceedings, liberty, family life, judicial protection, non-refoulement and to seek asylum.

Already the students successfully filed an urgent appeal before the United Nations in the past on behalf of Maru Mora Villalpando, prompting a strong communication to the United States.

“It was the time for the Inter-American Commission to address the problem. These public hearings are very difficult to get,” Gonza said. “The commission grants only a few addressing compelling human rights issues. Ours was the only one that involved a constructive dialogue with the U.S. government.”

At least, that was the initial plan. But the national day of mourning for former President George H.W. Bush also fell on Dec. 5, and U.S. government representatives chose not to attend the hearing. With only a few hours’ notice, the School of Law team had to help the defenders make a quick decision: Should they reschedule or move forward and present their testimony as planned?

“They decided to go ahead without the U.S. government being present,” Gonza said. “The immigrant rights defenders had made time in their busy schedules to be there. If we had postponed, even for a day, we would have lost maybe half of our delegation and most important testimonies. Some of them could be deported in the near future. On the positive side, since the government was not part of the proceedings, we had more time to present our findings and the commission committed to a written follow-up letter to the U.S. government to answer our questions.”

At the time, the defenders issued the following statement:

“For the second time under the Trump Administration, and in contravention of longstanding U.S. government practice, the federal government has not sent a delegation to respond to alleged human rights violations and answer the IACHR’s questions.

The federal government cited the National Day of Mourning for President George H.W. Bush as the reason for the late cancellation. The hearing petitioners respect this solemn occasion and have formally reached out to attempt to reschedule the hearing for another day. However, the Trump administration has not responded to these efforts, displaying a complete lack of respect for the IACHR, for the hearing participants and for its human rights obligations.”

The law school clinic students helped Tunkara and the other human rights leaders draft their statements, making sure to integrate their personal stories with legal arguments, addressing each one a different aspect of the problem. 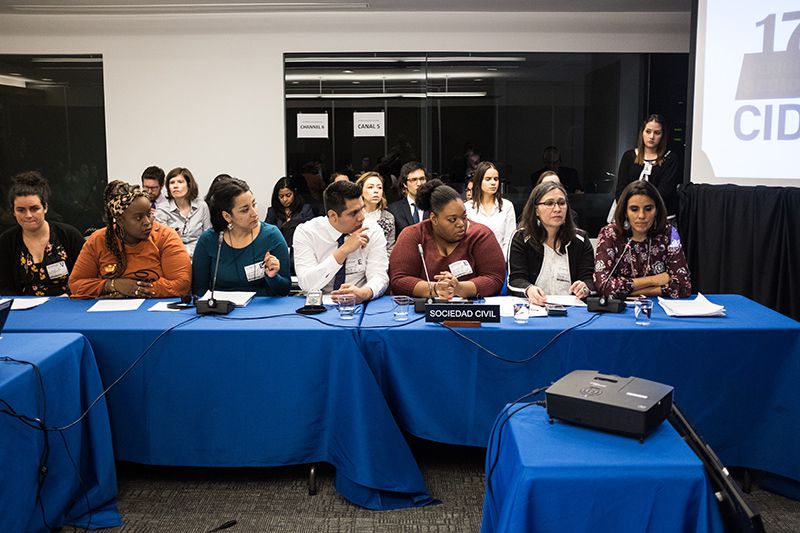 “We conducted interviews, read through their files and prepped them for the hearing,” said Saldivia Lagos, who is in her 3rd year of school at UW pursuing a joint degree in Law and a Masters of Law in Sustainable International Development. “We helped them identify specific issues to focus on that would ensure a more powerful presentation and demonstrate the legal elements required to be considered a threatened human rights defender according to international law.”

“It was not easy and Catalina helped me condense 10 months of events into a one- page statement,” Tunkara said. “I am so thankful I didn’t have to do this statement alone. The students were very pleasurable, humble, compassionate and professional.”

Preparing and participating in the hearing delivered a powerful learning experience for the students.

“As they prepared the defenders for their testimony, the students learned how to interview victims of human rights violations,” Gonza said. “They analyzed potential outcomes, identified most important arguments, and helped them weigh the risks and advantages with empathy. They did an amazing job, and I am very proud of them.”

Saldivia Lagos made the closing statement at the hearing, speaking eloquently about the violation of human rights and requesting that specific measures be adopted to enable the defenders to work freely without threat of retaliation.

“Handling the closing statement was scary,” she said. “I took my strength from the brave people sitting at the table beside me. In the end, it was not hard to find the right words when you’ve been so affected by these individuals and their stories.”

Hands-on real-world experiences, such as the commission hearing, are integral to the law school’s clinical programs. They enable students to hone their research talents and lawyering skills as well as learn how to perform under stressful or emotional conditions.

“This practice helps them develop the ability to design a human rights advocacy plan, identify international avenues for redress for our clients, build coalitions, and exercise  diplomatic skills that will be useful throughout their careers,” Gonza said.

Collaboration with other organizations was key in making it possible for UW Law Students to succeed in the project.

The 2018 Osheroff-Clark Fellowship funded the preparation of the hearing and the travel costs to Washington D.C. The UW Center for Human Rights was also part of the delegation presenting the report entitled “Secret Police: Access to Information about Immigration Enforcement in the United States”. 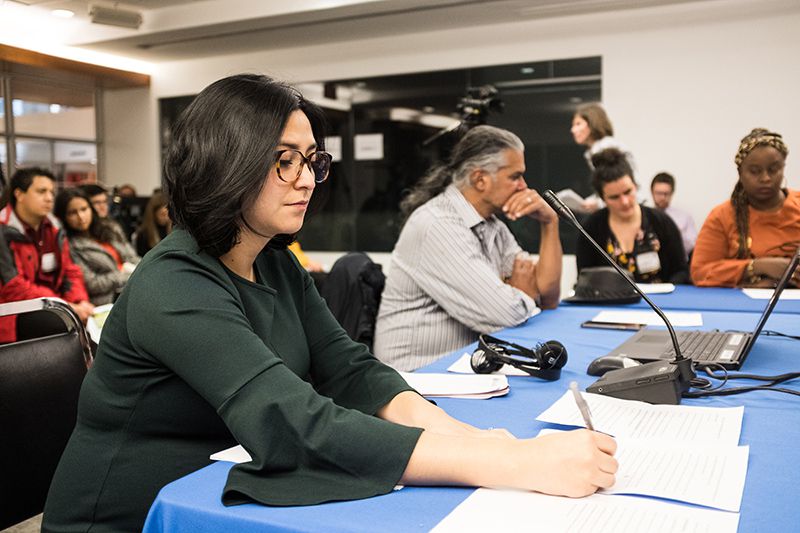 Researcher Emily Willard argued that there is a pattern across the country where ICE is actively providing false or misleading information, does not adequately respond to Freedom of Information Act requests, uses specific institutional arrangements to keep information secret, all causing severe impacts on human rights defenders, their families and communities.

During the Washington, D.C. hearing, the commissioners were visibly affected by the testimony and committed to forward the team’s questions and recommendations to the U.S. government, Gonza said. The commission chairperson also indicated she would like to visit the Northwest Detention Center in Tacoma to see conditions for herself.

For Saldivia Lagos, the commission’s pledge to follow up was encouraging.

“I think the hearing was a victory for the defenders,” she said, “but the consequences for them are on-going. The fight continues. The conversation cannot stop.”

New students who started the clinic in January picked up where others left off. They already sent a report to the United Nations Human Rights Committee, an international human rights treaty body assessing the US compliance with the international obligations.

“The work students are doing will help shed light of the inhumane treatment and abuses of immigrants and retaliation on advocates,” Tunkara said. “We are hopeful that if we continue to fight that change will happen and we can help save others’ lives and prevent family devastation. With the help of hard working UW Law students, change will come. Saja and I are grateful, and we will continue to fight injustice with the clinic’s support.”