Since its inaugural 2016 class, UW Law’s Master of Jurisprudence (M.J.) program has graduated dozens of professionals whose lives were changed by their time at UW Law.

The unique degree is part of an evolution in higher education that addresses a growing demand for professionals with legal training. UW Law’s initial M.J. graduates are some of the first in the country, and today students from all walks of life are leveraging the degree path to unlock opportunities that align with their passions.

While three such students — Selene Poulsen, David Rinn and Keelcy Perez Woolley — represent different parts of the country, career paths and interests, a common trait among the three is the drive to make an impact through excellence in their fields.

Read on to learn about their experiences. 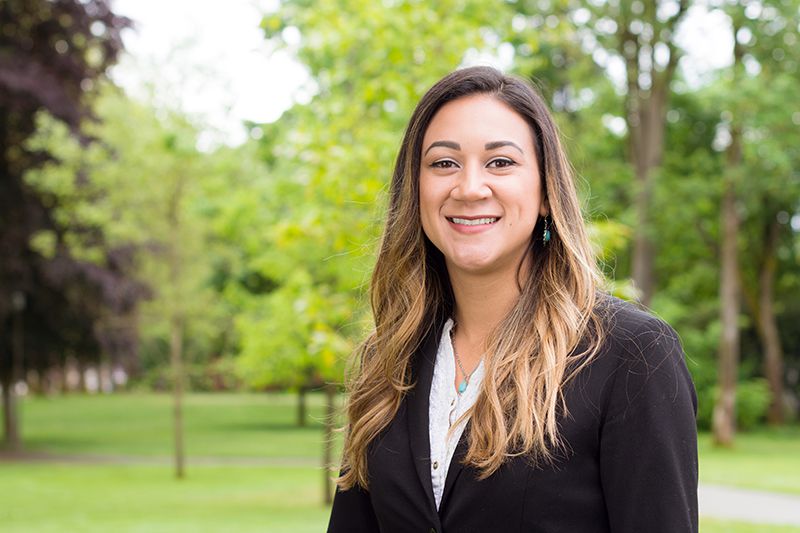 Selene Poulsen grew up in Bothell, Washington, but it was Texas where she started her own family and embarked on the path that would lead her to UW Law.

As a single parent, Poulsen was able to dip her toes into college classes in Houston before her daughter was born. After giving birth, she moved back to Washington and later enrolled in college, though she never imagined she could pull off full-time school back in her home state. But after locking in scholarship and family housing opportunities, she applied and was accepted into the Foster School of Business where she earned her degree in HR and Entrepreneurship.

While finishing her Business Administration degree, she heard about the M.J. program.

“One of my friends in HR showed me that she got accepted into the M.J. program, and that sparked that first conversation,” Poulsen said. “I didn’t think I could do a master’s — especially in law — but it sounded like a great opportunity and a natural transition that would complement my undergrad degree and expand my skills.”

I learned that I can do whatever I want as long as I put my mind to it and find the right resources.

Because of her background in HR and life experience, Poulsen had developed an interest in diversity, equity and inclusion initiatives and sought to pursue a degree in employment law. She worked with the M.J. team to develop a custom degree path that specialized in the field and aggregated courses from the law and business schools. Bolstered by a strong community of fellow M.J. students, she threw herself full force into her education and hasn’t looked back since.

“When I first started, my first thought was, what did I just do?” Poulsen said. “But so many of my classmates were feeling the same way, so that really was a bonding experience. We stuck together through our courses, and I learned that I can do whatever I want as long as I put my mind to it and find the right resources.”

Poulsen currently is completing two internships — one with a Fortune 500 company working on a diversity and inclusion program, the other with a philanthropic organization — before setting sights on what’s next for her and her daughter.

Poulsen says what she has learned about the law — and, more importantly, herself — lights the way for her family, whatever the future may hold.

“It has really empowered me to be a conscious citizen because I think a legal education is quite a privilege, and not many people get to do it,” Poulsen said. “My skills are diverse enough now and can be used not only for myself but to benefit our community.” 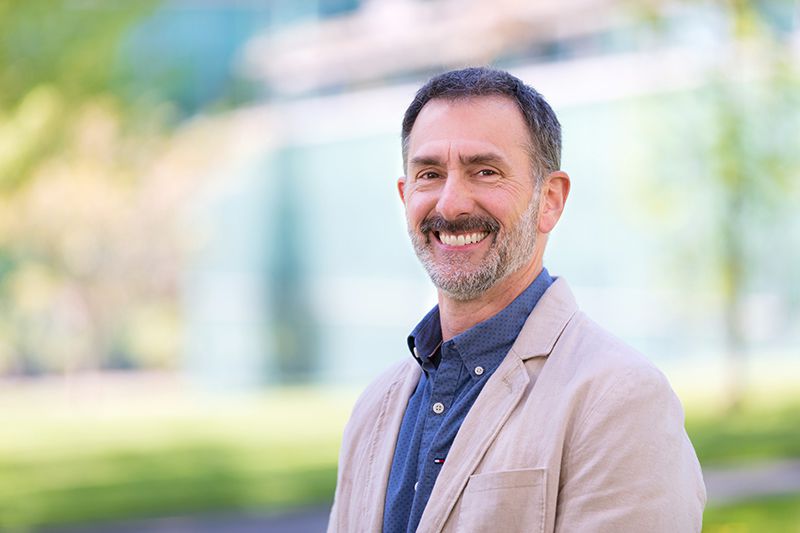 After a successful 25-year career in finance, David Rinn was quasi-retired, spending much of his time working with nonprofits and staying involved in politics. Then 2016 happened.

For Rinn, the election amplified many of the issues he was passionate about — voter suppression, partisan gerrymandering, electoral college reform — and inspired him to start writing the next chapter of his professional career.

“2016 really caused me to want to get directly involved in those areas,” Rinn said, “but before I did that, I wanted a foundation in constitutional law.”

Rinn’s longstanding interest in voting rights provided a solid foundation on which to build toward his goals. He just needed the final tools to do so.

Rinn, a New Jersey native who got his bachelor’s from Vassar College in 1985 and his M.B.A. from UCLA in 1989, applied to and was accepted into UW Law’s M.J. program. He worked with program leadership to develop a track focused on constitutional law. For the next two years, he tackled school full time while continuing to serve on the boards of two nonprofits and immersing himself in the law school’s Legislative Advocacy Clinic, which trains students in legislative and public policy advocacy.

What matters most is to pursue the things that are the most important and fulfilling to you.

Courses included constitutional law I and II, Washington state constitutional law, election law and more. Like other M.J. degree paths, Rinn’s was wholly unique to his interests. He thrived in the environment, though only after making the adjustment back to academia after earning his last degree three decades prior.

“Getting my mind set back into academics was a bigger adjustment than I anticipated,” Rinn said. “I had a unique experience as I’ve been out of school for a long time, but personally, I had decided I wanted to pursue something that was so important to me regardless of what I had done in my career previously.”

Graduating in 2019, Rinn and his wife are becoming empty nesters in the fall as their last child heads off to college. From there, his objective is to get involved in a policy or advocacy role, specifically as it relates to gerrymandering.

Where that opportunity lies is still unknown, but Rinn said he feels ready for whatever comes next following his experience at UW Law.

“As I’ve gotten older I’ve realized that it is most important to pursue those things that are the most fulfilling to you,” Rinn said. 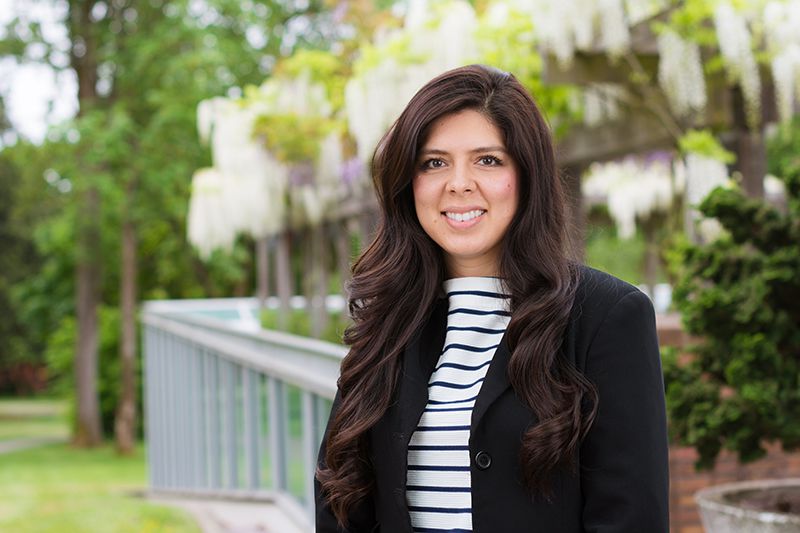 At first, other law students didn’t know what to make of Keelcy Perez Woolley.

As part of UW Law’s very first M.J. class, Perez Woolley and her classmates stood out from the rest of the school: law students but not J.D.s; master’s candidates but not LL.M.s; legally educated but not future lawyers.

The students were something all their own, and from that shared experience, a tight-knit community emerged.

“We were a very unique program, and we understood that going in,” Perez Woolley said. “People were really confused by us, and it was definitely tough because other law students didn’t know who we were or what we were doing.”

The M.J. program was — and in many ways, is — an emerging path in legal education. While today similar degrees for non-lawyers are offered at more schools across the country, only a few dozen were on the vanguard like UW Law and its first M.J. class.

The program, which is meant for non-lawyers seeking a deeper knowledge of the law in their fields of expertise, is one of the most diverse at UW Law, attracting students from around the world who plan to use their legal education to advance their careers and make an impact on the world.

For Perez Woolley, that meant working in immigration. As a Mexican American and daughter of immigrants, Perez Woolley’s own cultural heritage illuminated the career path she wanted pursue early on in her education.

After finishing undergraduate degrees at the University of Idaho, Perez Woolley worked as an immigration paralegal for two years before moving to Washington, D.C. to join an international corporate law firm. As she continued to perform pro bono work and get more in the weeds of her legal experience there, Perez Woolley had a feeling she wanted to take the next step.

“A lightbulb came on: If I want to go to law school, I have to do it now,” Perez Woolley said of her feelings at the time. “However, I wasn’t able to commit for a full three years. So, after browsing online, I found the program and saw it was geared for the individual who had legal experience but wanted more. So, I decided to go for it.”

A lightbulb came on: If I want to go to law school, I have to do it now.

Perez Woolley worked with program leaders to develop a custom track focused on immigration law. She took courses in employment law, immigration and also added an immigration policy class from the Evans School of Public Policy & Governance, among others.

After graduating, Perez Woolley leveraged her educational experience and became an in-house immigration specialist at a tech consulting firm before moving to Seattle-based company Tableau as a mobility specialist, where she is today.

Beyond her professional development, Perez Woolley said that perhaps the most valuable dividends from her time in the program were the lifelong connections she made with her classmates, some of which remain her closest friends. When she got married in early 2019, three of her fellow M.J.s were in attendance. She encouraged future students to do their best to bond with classmates and create a support system like the one in which she thrived.

“I would say pick the path you are passionate about before you go into the program,” Perez Woolley said. “Spend as much time as you can on campus, keep close relationships with your professors… it’s hard, but if you work through the program, just be intentional about the time you’re spending on campus and really build a community with your cohort.”

Learn more about the Master of Jurisprudence program.