“Doctor, wouldn’t you agree that the more invasive a procedure, the more dangerous it is?”

The scrubs-clad emergency department physician shifted in his seat. The mood in the room was tense and uncomfortable.

“I think that it depends,” he replied, “and I’m not sure how broadly you’re defining ‘complications,’ but yes, in general, that could make a procedure more dangerous ...” He paused.

Laughter broke out around the table, around which sat a group of doctors, law students and attorneys.

The interrogator was a real lawyer. The doctor was a real ED physician. The discussion was about a real case. The deposition was not.

The scene at Harborview Medical Center in Seattle was part of a program designed to educate emergency department doctors on how to manage malpractice risks, which are near certainties for physicians in this specialty. This biannual Medical-Legal Day is forged out of a unique partnership between the University of Washington School of Law and the University of Washington Department of Emergency Medicine.

“For emergency medicine physicians, there is a lot of anxiety around legal terms and the knowledge that we are in a specialty where at some point in your career, you will be named in a lawsuit,” said Dr. Stephanie Richling, MD, clinical associate professor of emergency medicine and pediatrics at Harborview Medical Center and Seattle Children's Hospital.

“The goal of the program is to normalize the whole process and provide residents with tools to approach it.”

Roughly three-quarters of ED physicians who work more than 20 years are likely to be named in lawsuits at some point, Richling said. And yet despite — or perhaps because of — this reality, Richling found there to be a severe lack of legal education within the medical community.

She began working with William Bailey, UW Law Professor from Practice, to develop a program to bridge the gap between the legal and medical fields.

Every other year, dozens of doctors, practicing attorneys, and UW Law students and faculty devote a full day to malpractice education. Expert panels delve into legal terms and strategies for protecting oneself from legal action. Doctors participate in a mock deposition with attorneys and law students around an actual case — an experience that even to observers feels as stressful as if it were the real thing.

This program really requires our students to stretch themselves, as they must examine real doctors about the standard of care in a real case. Professor William Bailey

For the law students in particular, Medical-Legal Day is a unique opportunity to gain real-world experience from the other side of the table.

“This has been a classic win-win joint venture,” Bailey said. “This program really requires our students to stretch themselves, as they must examine real doctors about the standard of care in a real case, not fellow students playing the role.”

Since its inception in 2015, the program has helped break down barriers between the legal and medical communities. Doctors are quick to coil up at words like malpractice and negligence, but if they aren’t prepared, it can make an experience with a lawsuit much more taxing, said Dr. Nicole Chicoine Mooney, J.D., M.D. ‘99. 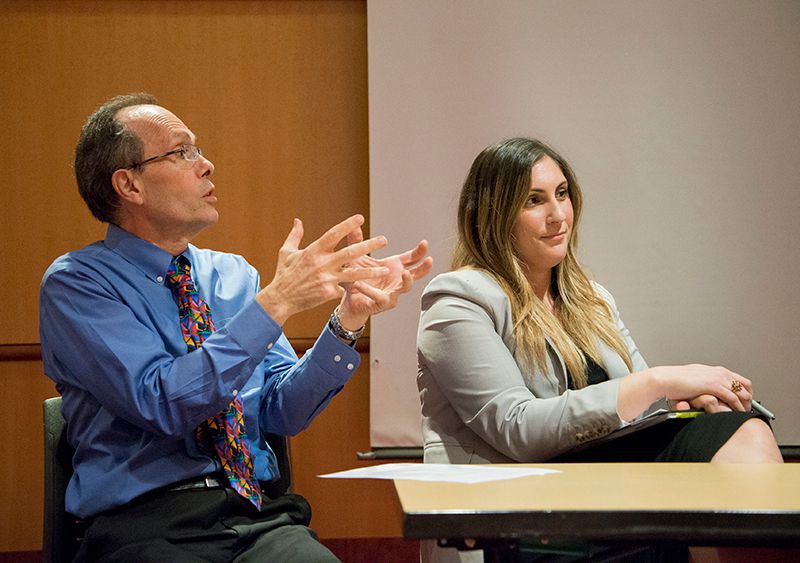 Mooney knows the challenges better than just about anyone. The UW Law alumna practiced for 10 years before her legal work in the medical field inspired her to become a doctor. She partnered with Richling and Bailey, as well as UW Law Professor Pat Kuszler, to chisel the program into its current form.

“With my background, I was clearly aware of how entwined law is with medicine,” Mooney said. “I realized how important it was for residents to get a sense of what it’s like to be deposed and the law students learn how to actually depose physicians.”

For many, the fast-paced nature of emergency room life can be particularly alluring, so it's no surprise that despite the risks so many doctors choose the specialty. Mooney said that’s why she chose the ED.

“Any day is nothing like the day before,” Mooney said. “You go into the mode of keeping your patient alive, and it becomes a combination of training and adrenaline and drive to do whatever it takes.”

Because ED physicians generally have no history, rapport or sometimes even a way to communicate with a patient who comes through their doors, they begin running through an algorithm to determine what needs treating.

The first step is to check to see if the airway is intact. Second, determine if the person can breathe. Next, check the blood pressure and the need for fluids or transfusion. Move on to disability and see if the patient is neurologically intact. Then, check ...

The list goes on, and every crucial second demands potential life-or-death decisions. Even when physicians do everything right, the risks are still incredibly high. Bad outcomes can happen.

A small fraction of malpractice lawsuits actually make it to court. When they do, physicians are generally given the benefit of the doubt given the nature of the profession.

“Because it’s such a challenging area clinically, emergency physicians really get a break in terms of how they’re perceived by the court system and juries.” Kuszler said. “A lot of suits don’t go anywhere, and just because there is a bad result with a patient does not mean negligence.”

Still, there are some key areas where doctors can take preventive measures to protect themselves as much as possible.

Documentation is key, Kuszler said, because it shows the step-by-step actions taken with a patient and allows doctors to review and contemplate their actions in the case.

Mooney said that the reasoning for a lawsuit is not necessarily monetary compensation.  Many lawsuits are initiated by patients and families who face bad outcomes – death, permanent disability, trauma – to simply learn what went down behind the hospital doors.

“Historically, lawyers and insurance companies would tell their doctors, ‘don’t talk, don’t apologize,’” Mooney said. “They were afraid anything they said to a family would be used against them in a malpractice case.”

That all changed in 2006 when the Washington State Legislature passed RCW 5.64, which affirmed that any statement of apology, sympathy or benevolence made to a patient was not admissible as evidence in a malpractice lawsuit.

In total, 36 states have similar apology laws. Clarifying the legal landscape is a central component of Medical-Legal Day, and apology laws are covered in detail.

“Many patients and their families have started lawsuits just to figure out what happened and why,” Mooney said. “And to receive an apology. A sincere apology can be so effective.”

It speaks to human nature that, no matter physicians’ best efforts to provide the best possible care under the most challenging conditions, sometimes something as simple as an apology can be the difference between closure and legal action.

Treating the heart can be just as important as treating the disease or injury.

“We learn from every single case that rolls in that door,” Mooney said. “We apply our training, we learn, we hope and we are grateful — grateful and blessed to have the opportunity to make a difference in our patients’ lives.”