TPL. EIP. SIO. DFR. CIP. While the acronyms Nicole Buckley 2L is associated with could fill a Scrabble board, more importantly they represent an expansive portfolio of work on some of the most important issues facing Americans in 2020.

Over her young career, Buckley has been part of ground-breaking research and advocacy efforts that strike the core of U.S. democratic institutions. Among her wide range of responsibilities as a research analyst at the Election Integrity Partnership (EIP), she has co-authored two papers related to the destructive spread of misinformation in media during an election year unlike any other. 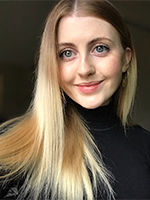 Through it all, Buckley remains driven by a long-held desire to create a more equitable society for all.

“My interest in law was really a marriage of two things, which were wanting to see equity from a young age and absorbing my dad’s passion for language and to convert that into something meaningful,” Buckley says.

Originally from Chicago, Buckley is a first-generation high school and college graduate who says she was influenced by her dad and his intellectual curiosity. She developed an interest in ethnic and racial politics while witnessing institutional inequities facing classmates from underrepresented and marginalized communities around her.

The law is inherently complicated by America's attention to race and the way that we have treated race in the past, and technology is a sphere in which those legal and social norms can be replicated.

A Double Dawg, Buckley was drawn to technology because of its role as a method of communication through which racial and social issues can be magnified, for better or for worse.

“The law is inherently complicated by America's attention to race and the way that we have treated race in the past, and technology is a sphere in which those legal and social norms can be replicated,” Buckley says. “There's room to decide how we're going to look at that sphere and hopefully change it for the better, so it mirrors our better angels and not necessarily the indiscretions that America has permitted in real life.”

Over her 1L summer, Buckley was brought on as a Hazelton Fellow at the UW’s Tech Policy Lab (TPL), a cross-campus collaboration focusing on enhancing technology policy through research and education. Her research included political efforts to disincentivize internet platform content moderation.

In the fall, she was recruited to join the EIP, which was just launching as a new coalition spearheaded by the Stanford Internet Observatory (SIO) and the UW’s Center for an Informed Public (CIP). The CIP is an interdisciplinary effort founded in 2019 to combat the spread and weaponization of disinformation in society, with law students and faculty playing key leadership roles.

Buckley was soon in the middle of the most important election in a generation. The EIP takes a multifaceted approach to detecting and mitigating the impacts of attempts to suppress voting or delegitimize election results. She found herself working with leaders who were advising representatives at the highest levels of government.

The first paper to which she contributed, Inconsistencies in State-Controlled Media Labeling, bridged the gap between her research at the TPL and EIP in spotlighting issues with how social media platforms flag false information. The second, Uncertainty and Misinformation: What to Expect on Election Night and Days After, nailed its predictive analysis on the fallout from the election and subsequent legal battles.

“We hope we can be a source that promotes a truth in media and in consumption in whatever form that takes,” Buckley says. “These efforts are really about trying to inform the public to some degree about what's going on, because the primary consumers of mis- and  disinformation are everyday ordinary Americans, as well as people just outside of America who are deeply impacted by the policies we take up here.”

Even with 2020 (almost) in the rear view, the election amplified the foundational role technology plays in American democracy. These issues aren’t going away, and Buckley’s efforts and those of her colleagues are more important than ever.

It’s crazy, she says, to stop and think about the scope of the work of which she is a part. Ultimately, she says she is fortified by the values learned early on that she strives to embody today.

“My biggest thing is just two words: be resilient,” Buckley says. “I had known for a very long time what I wanted to do and why I wanted to do it. Even when it felt like a million things were going wrong —that things didn't make sense, or I had absorbed other people's fears — I still held on to what made me and what brought me to law school. I still somehow managed to come back each day and say, ‘I want more.’”