In 2011, the member states at the United Nations Humans Rights Council endorsed a first-of-its-kind framework designed to prevent and address business-related human rights abuses around the globe, the UN Guiding Principles on Business and Human Rights (UNGPs). At the same time it established the United Nations Working Group on Business and Human Rights to promote the UNGPs globally.

Nearly a decade later, UW Law faculty, students and alumni are playing integral roles building on this work and shaping the roadmap that will have profound implications on how multinational businesses operate over the next 10 years and beyond.

“The Guiding Principles basically say to companies that there is this concept of do no harm, this idea that you have to respect human rights wherever you go and that complying with local law isn't enough,” says UW Law Professor Anita Ramasastry, who was appointed to a second term as the working group’s chair in July. She was initially appointed by the Human Rights Council in 2016.

“The 10-year anniversary is really significant because it signals a shift in the way we think about corporate accountability and corporate power.”

Prior to 2011, there were no benchmarks for responsibilities transnational corporations and other business entities shoulder in accounting for, responding to, or guarding against human rights abuses along supply chains and in other countries where they operate.

Recognizing the need, the Human Rights Council of the United Nations unanimously endorsed the UNGPs in 2011.

“The 10-year anniversary is really significant because it signals a shift in the way we think about corporate accountability and corporate power.”

Now, the working group is embarking on a 10-year project to implement the Guiding Principles more broadly and move the needle in manifold areas.

These include environmental justice, victims’ access to justice, technology and surveillance; the role of financial institutions and the investment community; and how the Guiding Principles can move governments and businesses to apply mandatory, stringent standards for protecting human rights.

The Cost of Doing Business

Following a high-level kickoff event hosted by the German government in July, one of the first steps involves researching and assessing the Guiding Principles’ effects over the past 10 years.

To this end, UW Law students and alumni, many of whom are from the law school’s Sustainable International Development LL.M. program, are filling key research roles that will inform future actions between now and 2030.

The amount of research and angles to consider is substantial. On one front, Sydygaliev is conducting comparative analysis of country reports from every continent focusing on the UNGPs’ impacts.

As a diplomat in the Kyrgyz Republic’s Ministry of Foreign Affairs, he says his participation in this project could directly impact his work back home.

“I have found out that the issues of human rights abuses in business spheres concern not only low- or middle-income countries, but in some cases also high-income countries,” Sydygaliev says. “Workers around the world suffer from violations of their rights by local and transnational business enterprises and, in this regard, I noticed insufficient efforts of governments to protect human rights.

“It has been very interesting because I've also analyzed reports related to my own country, and I've revealed for myself new information and many more sectors to consider in my further work.”

Khaki on the other hand is directing many of her efforts toward the analysis of issues amplified by the COVID-19 pandemic and their impacts on essential workers.

“The launch of this project is colliding with the unprecedented global COVID-19 pandemic, exposing the dire need for greater safeguards,” Khaki says. “All over the world right now you are hearing about how workers are treated poorly — they're underpaid, they're overworked, often they're vulnerable members of the community, people of color and people without access to resources. On top of this, the global community is witnessing the rise of racial disparities and growing inequalities, notable climate disruption, and greater conflict and corruption in various parts of the world.

"As we look towards the decade ahead, all of these challenges must be addressed. There is a clear acknowledgement that not one person can be left behind and we must create a more sustainable and resilient future for all." 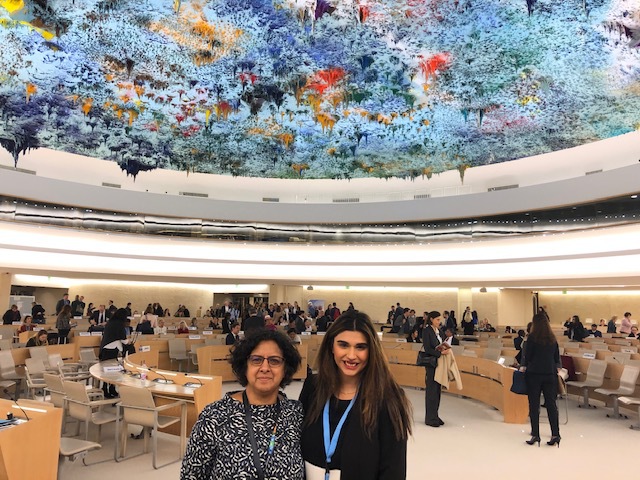 This ambitious project is brought to life by myriad partnerships with governments, NGOs, business associations and civil society organizations. Having just taken over the presidency of the European Union, Germany is playing a major leadership role, with substantial contributions by the Swiss and Norwegian governments, among others. The United Nations Development Programme is also a major partner on the ground with field presences in many parts of the world.

But at their core, individuals who are committed to contributing to a more just, sustainable and resilient future for the world are who power each of these efforts.

Equipping students with the tools to do so is at the heart of UW Law’s Sustainable International Development program. This work is an extension of that global mission.

“The fact that these students and alumni can work in these intimate settings and observe firsthand how international law and processes actually work is something I could never teach them in a classroom,” Ramasastry says. “For me, it has been really heartening to see them become confident and become insiders. That’s been amazing and I feel so happy they get that out of this work because it makes it just so much more exciting for them.”