Scholarship Spotlight: The History of the Reconstruction Amendments

In the 150 years since the last of the Reconstruction Amendments was ratified, the fundamental doctrines themselves may have not changed — but their impacts on Americans certainly have. 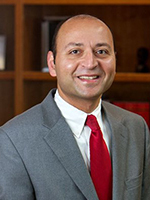 In his new book, UW Law Professor Peter Nicolas examines the complicated history of the 13th, 14th and 15th Amendments, and why the evolution of U.S. Supreme Court is so important to their real-world effects. This history, he contends, informs the future of some of the most important issues before the court today.

“If you look at the beginning of the period in which the court is interpreting the Reconstruction Amendments from the late 1800s to today, it's very different — the amendments have been interpreted very differently in those two snapshots in time,” says Nicolas, who has been with the UW since 2000 and currently serves as William L. Dwyer chair in law.

“Given what is going on with the U.S. Supreme Court today, what is so relevant is that this does change over time, and the composition of the court has made a difference. So, I like to have students examine over the course of history how the interpretation of these amendments has subtly changed and how that has impacted courts’ decisions, individuals and, of course, society.”

“The Reconstruction Amendments,” published by Carolina Academic Press, is a departure from how most likely learned the subject in history class.

Through its historically linear structure, the book illustrates how changes in the Supreme Court’s make-up and philosophy nudged rights-based constitutional law in different directions at various points in history.

Regarding issues like abortion, same-sex marriage and sexual discrimination, Nicolas shows how overturning landmark cases themselves can be largely irrelevant when subtle interpretations are enough to alter how laws function.

This is particularly important in 2020 as the United States enters a new — and likely generations-long — era of its highest court.

Take Roe v. Wade, for example. In the half century since the Supreme Court ruled the Fourteenth Amendment protected a woman’s liberty to choose to have an abortion, subsequent iterations of the court have replaced and reapplied different frameworks (i.e., trimester vs. fetus viability) and analyses (i.e., strict scrutiny vs. undue burden).

Without fundamentally changing the law itself, these developments changed states’ abilities to regulate and restrict abortion, which in turn have affected a woman’s right to choose.

“I like to have students examine over the course of history how the interpretation of these amendments has subtly changed and how that has impacted courts’ decisions, individuals and, of course, society.”

In the book, Nicolas shows this is one example of how the applications of the same doctrine can diverge. The narrative reinforces an old truth: Law never happens in a vacuum.

By seeing laid bare the successes, failures, triumphs and tragedies that constitute the history of the Reconstruction Amendments, Nicolas says law students can better envision the kinds of impacts they will have as the next generation of lawyers, judges, activists and change-makers.

“I'll be honest with you, these are hard decisions to read because we as Americans like to think of ourselves as very enlightened,” Nicolas says. “But our history is messy, and it's always been a tough balancing act because you don't want to erase it. It’s important to acknowledge that this is what we did, and we are going to try to learn from that history."