Among blocks of crumbling row houses in West Baltimore, one can see the deleterious effects discriminatory housing practices have wrought on the community. Here, Shelley Halstead ’14 sees opportunity.

Halstead is founder of Black Women Build-Baltimore (BWB-B), a nonprofit with a mission to help Black women create generational wealth through home ownership while developing critical life skills. In doing so, she is helping others build their own futures, quite literally, from the ground up.

“Because Black women have the least amount of wealth or net worth of any other group in the United States, it's really difficult to move into the middle class if you are not a homeowner,” Halstead says. “Traditionally most people enter the middle class through home ownership and having something to pass on to your children. Black women have just been left out of that.”

“This experience is so much different than what many of these women had expected their lives to be: This is changing the trajectory of what they can do in their lives.”

In 2017, Halstead set out to address this challenge a household at a time, founding BWB-B and purchasing a section of abandoned houses slated for demolition in the city’s Upton/Druid Heights neighborhood.

From permitting to construction, she is essentially a one-woman show, working side by side only with clients. Throughout the process, her clients gain practical skills in carpentry, plumbing, electrical work and more, as well as valuable lifestyle skills to ensure continued success. 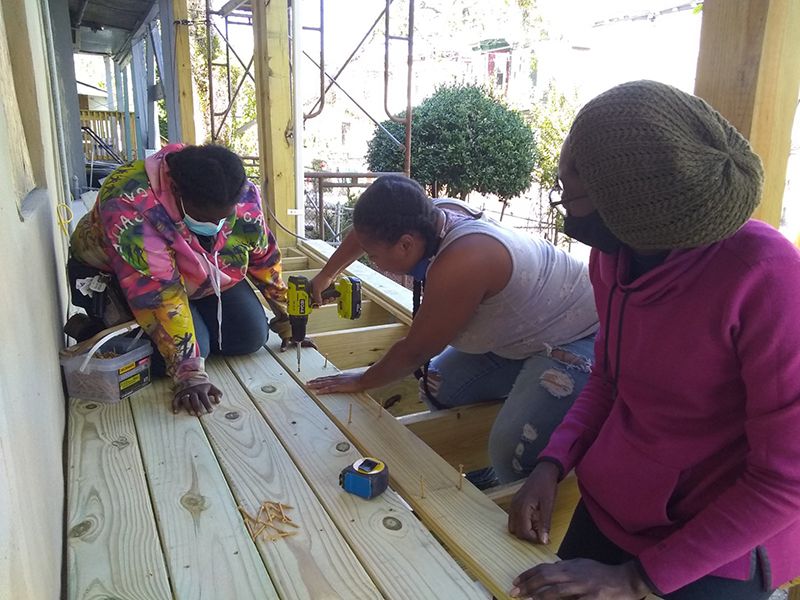 There is certainly no shortage of properties ripe for rehabilitation, a situation that is one of the effects of Baltimore’s long history of racist zoning laws, housing discrimination and redlining. Because of — or perhaps in spite of — this history, the city has been a launchpad for the organization.

“Baltimore is a great place to start this project,” Halstead says. “The housing stock is really inexpensive, but it’s also completely crumbling. You can get a house for a buck, but there are a couple trees growing out of it.”

Laying down a new path

Each home is an enormous project, particularly when the lion’s share is handled solo. The work requires all of the skills Halstead has developed over the years in the trades and legal field.

Born in Iowa, Halstead’s global lifestyle — she has lived in Belgium, India and Pakistan, among others — sparked an interest in the creation of physical spaces. When she returned stateside, she joined the carpentry program at Seattle Central Community College and soon found herself in Antarctica performing electrical work.

She faced significant hostilities in the workplace as a Black, queer woman in a field dominated by white, heterosexual men. She worked her way up to journeyman carpenter, and with the financial flexibility to think on how she wanted to make the biggest impact on her community, a path began to take shape.

“I was trying to think about what really moved me — what I donate to, where I volunteer — and how can I effect change in terms of issues I really care about like reproductive rights and economic justice,” Halstead says. “At the time, it really felt like law was the answer.”

“Being a Gates Scholar has been extremely helpful in part because it allowed me to think larger and to be honest about how to bring the skills I gained in law school together with the skills that I've been learning as a carpenter.”

She excelled at UW Law, earning a Gates Public Service Law Scholarship and eventually setting out for D.C. to start her legal career. She worked on policy issues at the National Center for Lesbian Rights as a reproductive justice fellow in the nation’s Capital before relocating to Baltimore as volunteer attorney.

She credits those experiences, and her discovery of her incompatibility with office life, with the decision to start something new.

“Being a Gates Scholar has been extremely helpful in part because it allowed me to think larger and to be honest about how to bring the skills I gained in law school together with the skills that I've been learning as a carpenter.” 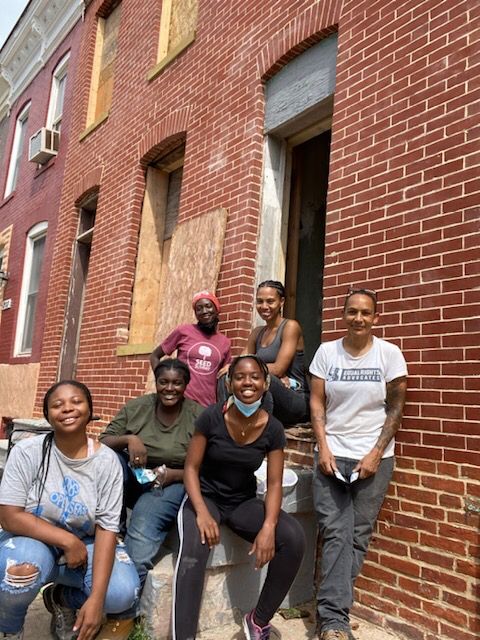 Today, Black Women Build-Baltimore is well on its way to the initial stated goal of completing 10 houses. As of this writing, Halstead has completed four homes with sights set on producing six a year moving forward.

The houses aren’t just livable: They are state of the art. And with every comp, the organization is aiming to raise property values in the neighborhood in service of closing the vast appraisal gap among the city’s Black and white areas.

She says her law degree has helped lend her credibility with colleagues and provided a solid foundation (no pun intended) for the behind-the-scenes work before, during and after physical construction.

The end results extend well beyond each house’s four walls. In the end, the generations to come next will be the ones to carry on the legacy of the courage and fortitude of the individuals who built the next chapters of their lives with their own hands.

“This experience is so much different than what many of these women had expected their lives to be,” Halstead says. “This is changing the trajectory of what they can do in their lives, and if they end up having a family and children, this is a mirror for them and others to see what is possible.”