Former family law paralegal Ellen Wen, 2L, was one of the first students to participate in the new Civil Rights & Justice Clinic (CRJC), which launched with the arrival of Professor David Owens in Spring 2021.

“You want to advocate the best you can for your clients. The stakes are high, because it's not even about the money. It's about giving your client a fair shot and the chance to talk about how somebody hurt them,” she said.

“In meeting real people who've been hurt, who might have hurt other people, you're trying to make sure that they get a fair shake. It can be frustrating and disheartening when people don’t,” Wen said.

On November 21, 2022, in one of the largest civil rights awards in Ohio history, Prof. Owens, along with attorneys from Loevy & Loevy and recent assistance from CRJC students, won a federal jury verdict of $45 million for Mr. Dean Gillispie, the wrongfully convicted Fairborn, Ohio resident and artist. 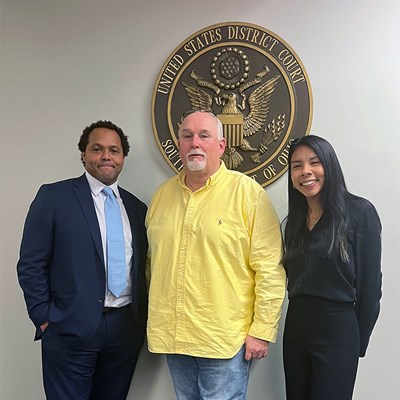 Trial evidence showed that Moore contaminated the investigation by creating unfair lineup procedures, claiming a witness had made an identification when she had not, and, even later, asserting that the witness might not recognize Gillispie in court because he “dyed his hair.” Evidence was also presented wherein Detective Moore failed to disclose camping receipts indicating Gillispie could not have committed two of the crimes because he was in Kentucky when they occurred.

While insufficient to remedy the wrong, the verdict is a strong statement against the injustice suffered by Mr. Gillispie, and of Gillispie’s innocence.

Exposure to these very real components of civil rights practice provides students with an accurate sense of the scope of this critical work.

Wen worked on a separate case involving a man who went to jail for two decades when he was a child, after he was coerced into confessing to a murder he didn't commit. “In filing a lawsuit on his behalf, one of the big issues in that case was regarding disclosure of his childhood medical records,” Wen said. “This person was imprisoned wrongfully for 20 years, and now you want to dig into his medical records and question him on the stand, and further traumatize him? These are the kinds of urgent fights that you're engaging in.”

“When the judge limited discovery of our client’s records, we felt that we protected his privacy because the requested records were irrelevant and outside the scope of discovery,” Wen said. “Later, a law firm cited that order, and we felt pretty proud that not only did the court adopt our argument, but suddenly firms are using it. We saw that we were influencing things and it’s very rewarding to see that.”

Wen and other CRJC students supported Prof. Owens as well with pre-trial work on a Daubert hearing.  They witnessed jury selection and went through motions, including substantive research and supporting Prof. Owens in preparing for cross examination.

“Because I spoke Chinese, and the client in this case only spoke Chinese, I helped speak with her,” said Wen. I helped with the witnesses as well, because we brought in some Chinese-speaking witnesses.”

Prof. Owens said, “The students did remarkable work in connecting with the client and her family and telling their story to the world.”

Quoting Owens’ coaching words, Wen said, “you’re always ‘fighting to party.’” The laws protecting police officers and municipalities are pretty robust, “so just being able to give somebody their day in court and for their claim to not be dismissed was already a win for us at trial.”